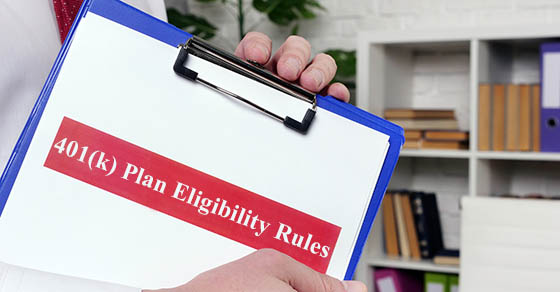 Under some circumstances, an employer that sponsors a 401(k) might wish to amend its plan to exclude part-time employees and offer the benefit only to full-time staff members. Is such an approach allowed under the rules for qualified plans? Coverage and service rules Employers have considerable freedom to decide which categories of employees can participate in their 401(k) plans. However, this freedom isn’t unlimited. For example, eligibility restrictions must avoid violating the minimum coverage rules. And service-based exclusions cannot violate the minimum service rules. Under those rules, employees generally can’t be required to have more than 1,000 hours of service in a designated 12-month period before being eligible to participate in a 401(k) plan. In addition, long-term part-time employees can’t be required to have more than three consecutive 12-month periods of at least 500 hours of service before they can make elective deferrals. Note: Deferrals aren’t required under the three-year rule before 2024, however, because only 12-month periods after 2020 must be counted. Tricky thresholds So, let’s say you’d like to exclude all part-time employees regardless of their actual service. This sort of categorical exclusion might seem different from an hours-of-service requirement, but part-time status is typically based on anticipated or scheduled service. And, in the IRS’s view, a service-based eligibility threshold that doesn’t count actual hours of service will fail the hour-counting rules if, in operation, it excludes employees whose actual service satisfies an applicable hour-counting threshold. For instance, if your plan were to define part-timers as employees who are “regularly scheduled” to work 20 or fewer hours a week, the plan might end up excluding employees who work 20 hours a week for 52 weeks and, therefore, have 1,040 hours of service for the year. In that event, your plan would be using a service-based threshold to exclude employees who, in fact, have satisfied the 1,000-hour minimum service rule. Beginning in 2024, employees with even fewer hours won’t be excludable from elective deferrals on account of their service if they work at least 500 hours in three consecutive 12-month periods. A potential solution One potential approach to excluding employees who aren’t full-timers is to look for a common, non–service-based denominator among them that you wish to exclude, such as job function or job location. For example, let’s say most of your part-time employees are performing the same job function or work at the same location, and you’re willing to exclude all other employees who perform the same job function or work at the same location. In this case, you might be able to craft a plan eligibility rule that excludes those part-timers without violating the minimum service rules. Be careful, though, because at least one IRS representative has indicated that even criteria that aren’t service based could violate the rules if they merely disguise an improper plan eligibility rule. Clear language Finally, bear in mind that errors in applying the 401(k) plan eligibility rules to part-time employees frequently turn up in voluntary compliance and IRS audits. It’s critical that your plan’s terms clearly state your design choices — especially when excluding certain classes of employees. Moreover, you should routinely review plan language to ensure it reflects changing employment practices. Contact us for more information. © 2022